Contemporary design – so irrepressible and always looking for new challenges – could not neglect the heating sector, which until a decade ago was limited to offer simple cast iron or aluminum radiators and as a milestone of excellence by providing the use of the bath radiator in the bathroom . The study of the theme has made progress going from the concept of “radiator” to a more complex “heated towel rail”.

The function of heat is now associated with the no less important integration in the ambience through the clever use of materials and technologies. The result is a versatile product of various shapes and sizes depending on the characteristics possessed may fall into the following categories :

1 ) Minimal design : the integration is done through the use of a heating body by the simple and essential lines . The objective is to make the object almost disappear between the existing furniture.

T Series – Matteo Thun and Antonio Rodriguez for Antrax
It integrates into the space without becoming the protagonist. Can also be used as a shelf and door objects in addition to its primary function .
Made of extruded aluminum can be positioned both horizontally and vertically .
www.antrax.it/

Teso – Dante O. Benini and Luca Gonzo for Antrax
A thin blade can be installed both horizontally and vertically with a space to hang towels and other items. Awarded the Red Dot Design Award.
Made with an aluminum profile and an assembly system designed to minimize the water content in order to maximize the yield .
www.antrax.it/

Monolite – Studio Batoni for Brandoni
It combines at the same time the function of shower and radiator exploiting the potential and the strong aesthetic impact of both. The band anchored to the wall and floor consists of the radiator , shower head, mixer , hand shower and diverter . The heated towel rails can be chosen only in the version column radiator , with two open sides , or at an angle with side hinged door closed.
www.brandoni.com/

2 ) Design object : the heating element assumes its autonomy as an object to look at and not to be seen occasionally as in the first case . The radiator takes on the traits of a real piece of furniture.

Tiki – Charles Martin for Ad hoc
The heating element is detached from the walls to take its autonomy , the cylinder hanging from the ceiling and spreads heat at the same time defines the space surrounding a sculpture,
www.madeadhoc.com/

Brick – Marco Baxadonne for Scirocco
The game for children becomes functional object for the home. The design is combined with the technique of creating a cover that encloses the outer steel core aluminum and copper.
www.sciroccoh.it/ 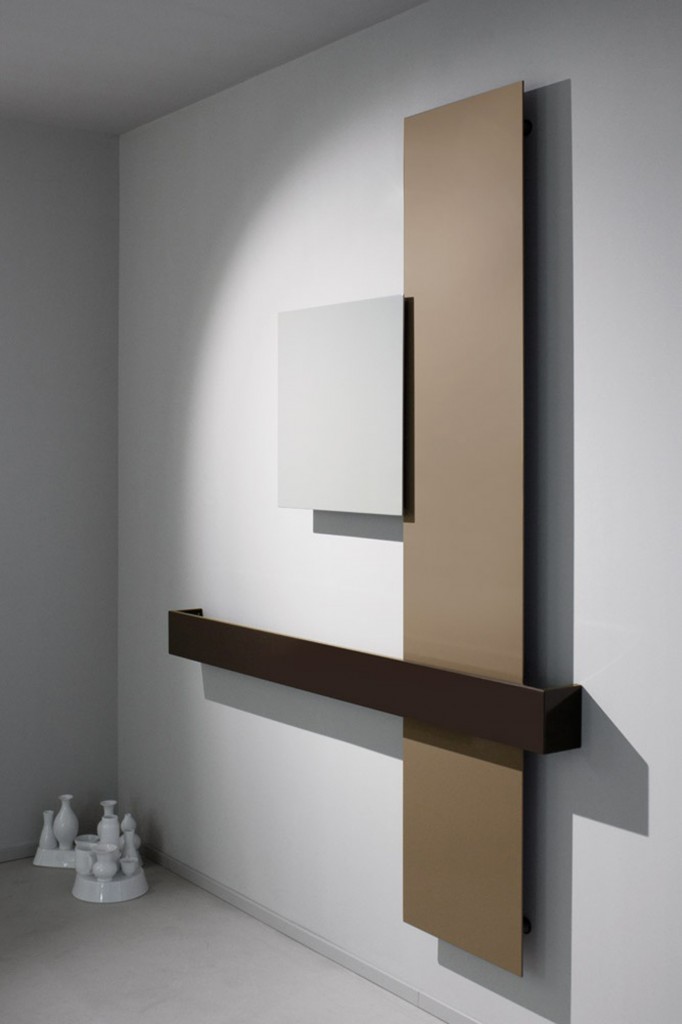 The heated towel rails revolutionises the traditional concept of element “ugly” but functional , representing instead the prime example of how utilitas e venustas can perfectly be combined with a careful study of materials, shapes and finishes of an object.